Money Heist is returning to Netflix for part 4 (or sometimes referred to as season 4) now confirmed for release globally on April 3rd, 2020. The explosive Spanish series is among the most popular titles on Netflix so here’s what we know about Money Heist season 4 including what to expect from the next chapter, who’s returning and more.

The renewal comes long before part 3 has even aired and comes at a bit of a surprise given that Alex Pina is working on another Netflix Original series due out in 2020. Álex Pina is a name you’ll be seeing on Netflix for many years to come given he signed an exclusive deal with Netflix last year.

One quick note is that Netflix technically classes each season as a part. For the purpose of this article, we’ll refer to part 4 as season 4.

Money Heist became an instant success after Netflix picked it up to air internationally. The first two seasons had aired on Antenna 3 in Spain before becoming a full Netflix Original for season 3. Season 3 of Money Heist is due out on Netflix on July 19th, 2019.

Over 34 million have tuned in to watch the show across the world. The show was also frequently mentioned in Netflix’s recent investor relations video in saying it was a key driver in international growth.

Since part 3 of Money Heist released, they’ve actually added more runtime to one of the episodes. That’s because, on the first edit, the team behind the show removed a segment featuring footballing legend Neymar. That’s since been re-added meaning it’s time to dive in for a rewatch.

To demonstrate the reach of the show, the famous writer Stephen King (who has a great selection of Netflix picks, by the way) requested a fourth season with the official Twitter account responding as follows.

Speaking recently as to whether the show was going to come back for a subsequent further two seasons Alex Pina said the following (translated):

“It was a complicated decision, there were many reasons not to return. On the one hand, it was a short and concluded series about a robbery. On the other hand, the protagonists end up being millionaires and putting them together for another robbery seemed something remotely impossible, but we realized that this was a band with different characteristics than we see in the stories of perfect robberies,”

What to expect from Money Heist season 4

Warning: spoilers for season 3 follow so if you haven’t caught up, this is your last warning.

Let’s quickly run through the events of Money Heist Part 3.

The band is back together again to perform an even bigger heist than the first one. All of it, however, is a ruse to try and rescue one of their members (Rio) who has been captured by the authorities.

Fast forward to episode 8 and we get a glimpse that the stakes have been upped dramatically. It’s an all-out war between the authorities and our gang with a new pregnant woman at the helm trying to bring them all in.

The Professor believes Raquel to be dead and calls for DEFCON 2 which results in the use of RPG’s against a tank rolling into storm the Bank of Spain where the gang is held up.

Nairobi’s fate looks bleak given her bullet wound and the Professor’s plan is seemingly up in the air with the new police negotiator firmly in control. Some fans have speculated the fact that Nairobi failed to appear in a recent recap could mean she’s now done for. However, in the official date reveal (see below) she has been confirmed to be back although likely wounded. 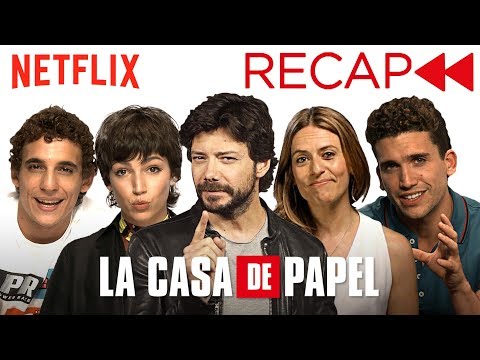 We’re expecting to hopefully see the inevitable escape or, as it’s looking like at this point, the demise of the crew.

In terms of the tone, the creators confirmed that it’s going to be slightly different going into part 4. Here’s what they had to say in an interview (translated to English via Google Translate)

“I think the next season will be a bombshell for many reasons. We came from the third season with a feeling of vertigo, because it was the first one we produced for Netflix, we had used up a first robbery and we had to show that we could design a new one with more adrenaline and strength. I think we were so worried about that we got a lot of rhythm and milestones. In this fourth season what we propose is to stop a little, lower the piston to be able to dramatically savor some characters and then return to hit a burst in a part of the middle of the season. It is a very special season to be able to taste it and with very powerful bombs. ”

To translate further what that means, the creators went all in for an explosive third part to lure people back into the world of Money Heist. In contrast, season 4 will slow things down and be focused on characters.

When will season 4 of Money Heist release on Netflix?

The good news here is that Alex Pina confirmed that filming and production directly followed part 3 which wrapped up earlier in 2018. Filming for part 4 was confirmed by Alva Morte, who plays The Professor, to have wrapped up in August 2019.

With an interview with Cadena 3 we were led to believe that part 4 of Money Heist would be on Netflix in January 2020.

However, we now know that part 4 of Money Heist is coming to Netflix globally on April 3rd, 2020.

Announced on January 30th, 2020 as part of a slew of new Spanish titles, Netflix revealed their working on a documentary for Money Heist.

The documentary is said to be a reflective one looking at the global impact of the show thus far.

Those confirmed to be taking part in the documentary include:

The documentary will arrive on Netflix on the day of season 4’s release date.

Will part 4 of Money Heist be the final season?

There is, however, good news for Netflix members looking for more series from the creator of Money Heist. As we mentioned above, Álex Pina is working on two upcoming series as part of his output deal with Netflix.

White Lines is a new series is a new mystery crime series where a woman looks to solve the mysterious death of her brother in Ibiza. The other upcoming series, Sky Rojo, is in early development.

Are you looking forward to season 4 of Money Heist? Let us know in the comments down below.

We would keep updating this page from time to time with the most current details.

JUST IN: Ramaphosa Confirms Lockdown Would Not Be Extended