The granite headstone at the grave of former Canadian prime minister William Lyon Mackenzie King in Toronto has been defaced. 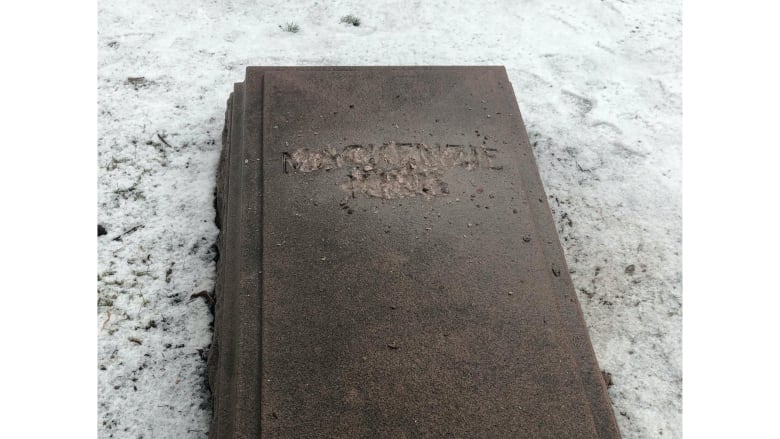 Someone has defaced the headstone of William Lyon Mackenzie King in Mount Pleasant Cemetery in Toronto. (Ben Buchanan)

Toronto police are investigating and said the offence is considered to be mischief over $5,000. No one has yet been arrested for the vandalism that was first discovered on Jan. 3 at Mount Pleasant Cemetery.

King’s name was chiselled out of the granite monument and a photo ceramic image of him on a Parks Canada historical plaque was scratched off.

“Looking at the damage that was done, it would appear that it was deliberate on the granite,” Rick Cowan, assistant vice-president of marketing and communications for the Mount Pleasant Group, said on Saturday.

“Whoever did this would have had to have come prepared to do that damage.”

Security officers discovered the damage to the headstone, known as a ledger grave marker, and the Mount Pleasant Group notified the police and Parks Canada on Jan. 4.

READ MORE  All employees to be tested at Canada Post facility in Mississauga, Ont., as COVID-19 outbreak grows

Cowan said he was saddened when he found out about the vandalism and said it marked the first time that King’s gravesite has been damaged. Cowan called it “pointless” and “immature,” and said he is not sure what is gained by such damage.

“It’s extremely disappointing that there are individuals who are predisposed to doing this kind of thing,” Cowan said.

“It appears to be completely senseless. Again, it’s sad that this type of thing does exist. I couldn’t tell you what the motivations are.”

Cowan said the vandalism seemed “quite random” and the cemetery did not receive any indication that the vandalism was going to happen. He added it will probably not be repaired until April this year.

“It’s difficult to make reason out of something that seems unreasonable,” he said.

Cowan said the vandalism is not a way to resolve issues.

King not in the news right now, historian says

“He hasn’t been in the news lately,” she said. “It surprised me that anyone in the public would care enough to vandalize his monument right now. Nobody on Twitter is talking about Mackenzie King right now. It’s all about John A. Macdonald.”

Gilmour, who wrote a book about the former prime minister entitled Trouble on Main Street: Mackenzie King, Reason, Race and the 1907 Vancouver Riots, said King designed immigration policies that showed he did not trust immigrants to assimilate into a Canadian way of life.

Gilmour said he is considered the most famous Liberal prime minister of all time in Canadian history and she said it is possible the person who did the defacing is making a statement either against racism or against Liberalism.

“He reflected all of the complicated prejudices and racist ideas that were prevalent in his time. Sometimes his policies reflected those but they were always reflected through those. We can’t escape race when we talk about Prime Minister Mackenzie King.”

Gilmour noted that one of his most controversial decisions during his time as prime minister was that the Canadian government did not allow the docking of the MS St. Louis, a ship carrying Jewish refugees from Europe in June 1939, just prior to the outbreak of the Second World War.

Gilmour said King feared “social disorder” within Canada if he allowed the ship to dock. She said the decision is seen as shocking today because it was an anti-Semitic act.

“There’s no doubt in my mind that he had racist views towards people of colour and Jewish immigrants,” she said.

His personal diary, which was published, captures those racist views, she noted.

Anyone with information about the defacing is urged to call Toronto police’s 53 Division.

JUST IN: Ramaphosa Confirms Lockdown Would Not Be Extended